I recently finished working on my Master project here at UCL. It was supervised by Arthur Gretton and Massimiliano Pontil and was about kernel selection for a linear version of the Maximum Mean Discrepancy, a kernel based two-sample test. Download report here.

Given sets of samples of size m from two probability distributions, a two-sample test decides whether the distributions are the same or different with some confidence level. The linear time MMD statistic is defined as 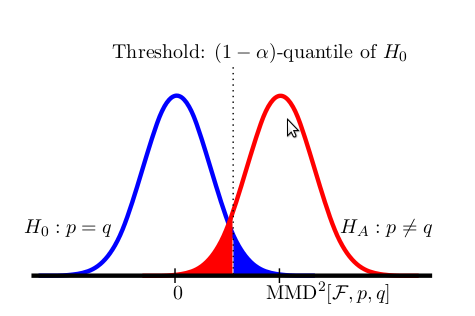 The linear time version is highly interesting for large-scale problems since one does not have to store data in order to compute it. Instead, it is possible to compute statistic and threshold in an on-line way.

All above plots and results can be found in the report. Many results are joint work and went to the article “Optimal kernel choice for large-scale two-sample tests”, which was accepted at NIPS 2012 while my report was written. Many thanks to the other authors, in particular to Arthur Gretton, Dino Sejdinovic, Bharath Sriperumbudur, and Massimiliano Pontil for all the fruitful discussions and guidance.